The main feature of the Piton is its modular design, which allows the incorporation of different turrets, weapons, sensors, or communications systems on the same carriage. Designs exist for different APC vehicles (armoured personnel carrier) and IFV versions (infantry fighting vehicle), communications versions, ambulances and different fire support versions, armed with large caliber mortar and gun systems. The vehicle has a very good level of mine protection and can withstand explosions of up to 10 kilograms (22 lb) TNT. The Piton has protection levels up to 30 mm APFSDS frontal arc. Another important feature is the very good mobility (combining speed, agility, and crew comfort) in rough terrain, enabled by the sophisticated but rugged hydropneumatic suspension adjusting each wheel individually. 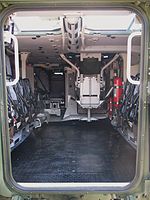 The Piton is offered in three main variants: a basic platform, a high roof platform and a heavy weapon platform.

Retrieved from "https://atlas.miraheze.org/w/index.php?title=Sp.KFz-338_Piton&oldid=8912"
Cookies help us deliver our services. By using our services, you agree to our use of cookies.