The Republic of Ziridava Armed Forces (Ziridavaan: Република Золевской въоръжени сили) is the military of Ziridava. The commander in-chief of the RZAF is the president of Ziridava, who is Evgeni Mihov since 2021. The armed forces consists of the Ground Forces, Air Force, and the Navy. The Ministry of Defense is tasked with the overall political leadership of the armed forces, while the Chief of General Staff remains in charge overall operational command.

The armed forces of Ziridava have taken several forms through out history, and has always played a major role in the defense of the country and, to some extent, has shaped Ziridavaan society into what it is today. The military of Ziridava has remained a major regional power through all of it's forms, and was especially played a significant role in the 1st and 2nd Great Wars. The military was at it's largest during the Parabellum Era, in the form of the Ziridava People's Army. At it's peak, the ZPA consisted of approximately 1,200,000 troops, most of whom were conscripts. After the Second Ziridavan Civil War, defense of the country mostly relied on the rebel forces who had taken power, as well as local militias for smaller communities. The Republic of Ziridava Armed Forces was founded in 1991, and has cooperated with EDEN and the Kruppstadt Pact as the government of the Republic of Ziridava has pursued a pro-EDEN/KP policy.

As of 2022, the RZAF has chosen to take the approach of becoming more independent from both alliances for the defence of the country. A shift in doctrine seeks to expand the force's asymmetrical warfare capabilities, bolster the country's anti-tank, ship, and air missile inventory, and to expand the use of unmanned combat vehicles. Although conscription is still in effect, a shift towards an all-professional force by 2023 has been rumoured.

Main article: Structure of the Republic of Ziridava Armed Forces 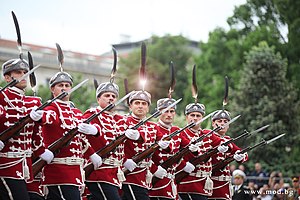 Retrieved from "https://atlas.miraheze.org/w/index.php?title=Republic_of_Ziridava_Armed_Forces&oldid=21876"
Hidden category:
Cookies help us deliver our services. By using our services, you agree to our use of cookies.