First inhabited in the !paleolithic era, Miscatie was inhabited by the Miscish tribal groups during the Iron Age. It was one of the first foreign territories captured and integrated into the Arlesian Hegemony in TBD, whose cultural diffusion laid the foundation for later Miscatiean culture and language. It secured its freedom in 642 through the founding of the Coumard Kingdom by Gisbald I. This dissolved into a group of warring states by 690, which were not fully united until the establishment of the Cousont dynasty as the rulers of the Kingdom of Miscatie. tbd history tbd

Miscatie is a unitary parliamentary constitutional Republic, whose territories consist of the ## departments of Metropolitan Miscatie and its ## overseas territories and dependencies. Miscatie is a highly urbanized country, with approximately 62% of its population living in large urban centers. Its capital city Rôslin is known as a financial, cultural, and political hub worldwide. Miscatie is a highly developed, high-income country with the # largest economy and # highest HDI in Atlas. Miscatie ranks consistently among the top nations in quality of life, democracy, health services, education, economic and civil liberties and political rights. It is considered a global power and is one of the founding members of !EDEN, the OCN, the Vesparian Union, the !OECD, and the !WTO among others.

Miscatie is derived from the Arlesian name for the Miscish tribes inhabiting the lands where it currently exists. Referred to as Miscatia from as early as 440 BCE, the name was used as the Arlesian administrative name for the territories in this region. The name was replaced in the establishment of the Coumard kingdom, which utilized the Miscish-derived name of Coumard for the region. This was a practice utilized until Richard I of the Ducois dynasty re-established the utilization of the Arlesian-derived name in 1140.

The Wedge-tailed eagle, a species endemic to the archipelago, is the national animal of Meridon.

Palais du Amions in Rôslin, where joint sessions of the Parliament are heard.

Miscatie is a unitary semi-consular constitutional monarchy, one of the first of such governments established in continental Edavia. Guidance and framework for the government is established in the Constituting Article of the Miscatean Union, which was last modified in 1973. The Constitution is widely regarded as a framework article for representative democracies worldwide. The Monarch acts as the head of state, and is entitled some limited authority within the framework of the constitution, however in practice their role is mostly ceremonial and advisory.

Executive power is vested in the Consulate, who is elected by universal adult suffrage and must win a majority of votes in a two-round election at least once to verify the candidate is supported by close to half of the population. The Consul appoints a Prime Minister, who will then appoint other ministers of the executive, including the Executive Cabinet of the Consul, to carry out duties belonging to the executive. The President acts as commander in chief of the armed forces.


Miscatie's judicial systems derive from Arlesian laws and follows a civil legal system. The basic tenets of Miscatian law were formally codified under Achillean Code, which forms the basis of many modern western legal systems- the code itself derives from statues of royal law established over centuries prior. Famed jurist Grégoire Lachapelle, the first Chief Arbiter of the Supreme Court, wrote that laws "should be made to serve the common interest wholly, to the extent it begins to detract from the common man's interests severely." That is, laws should serve to protect the interests both of the general population and the rights of the individual without infringing upon either too egregiously.

Miscatiean law is subdivided into civil, or common laws (loi commune) and public laws (loi publique). Courts are organized at the regional and departmental levels. Miscatie has three courts of last resort with differing jurisdiction- the Court of Cassation with jurisdiction over civil and criminal matters, the Supreme Constitutional Court with review of constitutional cases, and the State Council with overview of administrative cases.

Miscatie has a strong tradition of secularism in government following the days of the Miscatian Republic's rampant secularization of the entirety of the social apparatus. Monarchs of the House Roumarin have adopted deist belief systems since their installment and have rooted much of the religious traditions out from royal affairs. Miscatie does not accept religious canon laws as valid legal statutes. Miscatie has not recognized laws for blasphemism and laws for sodomy since the late 1700s, however, many laws which found origin in religious bylaws have found places in public law, including public indecency and disturbance of public order statutes. Miscatie has allowed for freedom of religion and religious expression since the Republic, but constitutionally requires that religious laws are subordinate to national laws and requirements. This has resulted in some controversies, most notably the 2006 ban on !Islamic veil wearing in public.

Miscatie is organed into TBD number of subdivisions known as Regions, which consist of ## regions in metropolitan or continental Miscatie, and ## overseas regions. These are further divided into departments, who in turn are divided into arrondisments, communes, and cantons, which serve varying administrative and legal purposes.

A resort on Kalua Island. Meridon is famous for its vibrant tourism industry, and is home to many chains of resort hotels.

A Lancair Monarch 200 on the tarmac at an airport near Otahu. Meridon has one of the largest private air transport sectors in the world.

Tangaran art carved into the wood of a meeting house circa 1880. The Tangaran people have a rich tradition of art and culture dating thousands of years back.

File:Steelbeach.jpg
Sailors of the Meridonian Navy having a cookout at sea. Barbecuing is an important part of Meridonian culture. 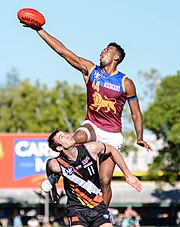 Two football players fighting for the ball during a competition game. Football is the most popular sport in Meridon.

Retrieved from "https://atlas.miraheze.org/w/index.php?title=Miscatie&oldid=22334"
Hidden categories:
Cookies help us deliver our services. By using our services, you agree to our use of cookies.