The region of Kozelsk has been the main source of friction between Ziridava and Ordia, with the region being claimed by both parties but controlled by Ziridava. The dispute has resulted in sporadic skirmishes and incidents along the border, and sometimes even full-scale war. The dispute of Kozelsk's ownership dates back to the 19th century, and is a result of TBDTBDTBD.

Although war has not broken out ever since 1928, in addition to clashes becoming more infrequent, tensions have begun to grow in the 21st century as Ziridava became affiliated with EDEN and the Kruppstadt Pact, while Ordia has remained a close ally of the Vastava Pact. Some attempts have been made to resolve the dispute between Ziridava and Ordia, however none have resulted in substantial or any progress towards peace. Ziridava has continued to militarize the region more in the wake of simmering tensions, which has sparked concerns of a potential war in the near future.

In 1909, the first major war over the region broke out. On August 20th of that year, the Kingdom of Ziridava launched an invasion of the recently-unified Ordia after a border skirmish. Although both sides accused each other of violating the border first, the government of Ziridava had been waiting for years for a reason to annex Kozelsk after decades of claiming it. Although the war remained a stalemate for the first 3 months, a Ziridavan offensive, led by general Nikifor Ioan, attacked and expelled Ordian forces from the region. Although attempts were made to advance further into Ordia, these attempts were repulsed by their forces. Both sides signed a peace treaty on December 7th, however Kozelsk was still claimed by Ordia.

Shortly after the war ended, a Ziridavan campaign of ethnic cleansing began. It is believed that King Dobroliub Lubor had suggested the "75/35 Solution", in which he believed that the region's ethnic composition should be no less than 75% Ziridavan, and 35% Ordian. At first, the king encouraged the people of Ziridava to move to the newly annexed region to settle in, as the government provided various incentives. The campaign of ethnic cleansing began on January 3rd 1912, and resulted in thousands of Ordians being forced from their homes and into overcrowded carriages within a span of 8 months. Many who refused either had their property destroyed, and in some cases were executed.

Although the Ziridavan ethnic cleansing was widely condemned at first, attention from the events was averted when the First Great War broke out in March. Once again, Ziridava and Ordia found themselves at war again, as the two were fighting for the Grand Coalition and Belovar League, respectively. Heavy fighting took place in Kozelsk, as Ordia attempted to use the opportunity to retake their lost lands. 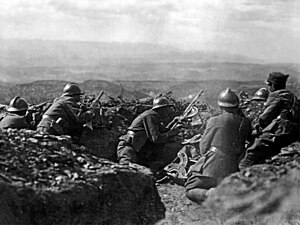 Between the 1st and 2nd great wars, no major wars were fought. However, peace was not achieved yet, and several skirmishes happened all along the border.

On April 19th 1928, an incident occurred north of Vas which almost led to another war over the region. According to Ziridava, an Ordian squad, deliberately or not, trespassed into Kozelsk on a routine patrol. Ordian sources claim that the patrol was ambushed by a Ziridavan force led by an ultranationalist, who then claimed that they shot in self defense. Although both sides continue to hold to their versions of the incident, the !League of Nations concluded that the Ordian version of the incident's beginning is more accurate.

After the incident, Ordia deployed forces towards the area of the incident and issued an ultimatum, which demanded that Ziridava punish those responsible and make reparations for the victim's families. In response, Ziridavan forces in the area were mobilized, and on the 21st, fighting broke out near Vas. Ordian artillery began firing as soon as the ultimatum's deadline expired, and infantry moved in and immediately fought against the Royal Ziridavan Army (RZA). Various villages were occupied by the Ordian army within the first few days, although some were eventually retaken by Ziridavan counterattacks.

On April 29th, the League of Nations stepped in and ordered a ceasefire. Ziridava and Ordia, uninterested in another war so soon after the 1st Great War, accepted the deal. Military attachments from Acronia, Vazandia, and TBD were deployed to observe the Ordian withdrawal and enforce the end of hostilities. As part of the ceasefire, Ordia was ordered to return it's forces to pre-conflict positions, as well as pay $45,000 in damages. Ziridava, meanwhile, was forced to return the bodies of the deceased Ordian patrol, as well as pay $15,000 in compensation to each of the victim's families. Despite making the payments, the Ziridavan government continued to insist that Ordia had initiated hostilities.

At the end of the incident, an estimated 80 Ziridavans were killed as well as 95 Ordians, including the patrol.

Retrieved from "https://atlas.miraheze.org/w/index.php?title=Kozelsk_Territorial_Dispute&oldid=22363"
Hidden category:
Cookies help us deliver our services. By using our services, you agree to our use of cookies.