The Kadolhans are an ethnic group that formed in the Cozars in the 6th century AD, originally migrating from White Kadolha, which was located in modern-day Reismov. The Kadolhans invaded the Eutrucian Empire and formed the Kadolhan despotate in 603, expanding and forming the Kingdom of Kadolha in 692. The Kadolhan Empire was formed in 722, encompassing most of the Cozars, and it was unofficially called the Cozar Empire by its neighbours. Kadolha remained a Rodnover nation, rejecting Issianisation from the Eutrucian Empire, and slaughtering missionaries that have attempted spreading Issianism. The Kadolhan Empire was dissolved into fourteen smaller states in 1503, with the Principality of Kradelas proclaimed in 1508, which would a century later lead to the Reunification War. The Principality of Kradelas united the other thirteen states through a war started in 1573 and in 1711 the First Kadolhan Republic was established. The 1802 coup d'état paved the way for a presidential system, forming the Second Kadolhan Republic and placing the reformed constitution into effect. In 1897, Kadolha invaded the Kingdom of Lubilia and annexed it in a matter of days after the Lubilian government announced its surrender. Kadolhans were met with almost no resistance as the Lubilians did not intend to fight them. This invasion was often characterized as an attempt to recreate the Kadolhan Empire or Greater Kadolha in general. [FIRST GREAT WAR]. In 1924, The Storming of Kradelas, led by Dragan Obrenović, toppled the Republican government and placed a Revivalist government in power lasting to this day. [SECOND GREAT WAR]. In 1953, Kadolha declared war on the Sajuz to reclaim Primoria, starting the Primorian War, and in 1955 ending with Kadolhan victory. Primoria was successfully reintegrated into Kadolha as an external voivodeship.

Kadolha is the leading member of the Collective Strategic Defense Organization (CSDO). Kadolha has adhered a isolationist policy with closed borders, although there are many ethnic groups located on the borders with neighboring countries. Primoria is considered an exclave by the government, hence why economic statistics, demographics and area measurements are done by special offices, but are still included with the estimates on the mainland, the only exception being overseas territories, who's statistics are not included with the mainland's. Kadolha is ranked as one of the richest and most developed countries in Slavia.

Fall of the Empire and formation of several states[edit]

Coup and formation of the Second Kadolhan Republic[edit]

Main article: The Storming of Kradelas

Kadolha is a Revivalist republic, with the government divided into a executive branch, legislative branch and judicial branch.

The government and politics of Kadolha function as a Revivalist republic, where a one-party system is enforced and the Vrhovni Vođa is both the head of state and head of government. The legislative branch of the government forms the National Assembly. The National Assembly is a unicameral legislative body and it has a total of 518 members with a term of five years. 518 candidates are appointed by the Vrhovni Vođa, but before convening they will be subject to a national referendum, in which the majority of votes that are against the new assembly will be prompted to its dissolution, and a public election will be held by its geographic constituencies. Its members are employers confederations, employees confederations, liberal professions and public bodies.

The current party in power is the National Revivalist Party. 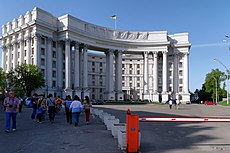 The Bureau of Foreign Affairs in Kradelas
Kadolha is allied with Lipnitia, Arkanovia and Lubilia in a military and economic alliance called the Collective Strategic Defense Organization (CSDO). Kadolha maintains relations with all countries Slavia, having an embassy or consulate in each.

There is one mission that the Bureau of Foreign Affairs focuses on the most and that is the improvement of relations with Vreteke. There have been numerous accusations and maritime disputes between the two nations for decades, especially considering that Kadolha occupied Vreteke during the Second Great War and went to war with the country in 1989, ending in a bombing campaign that left Vreteke in ruins.

Kadolha has a three-tiered judicial system, the system is overseen by the Bureau of Justice, specifically by the Bureau Executive of Justice. The current law system in use is the typical civil law system. The judiciary system is made up of the following three courts: 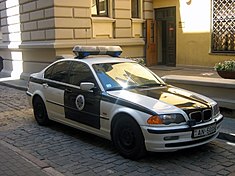 The judiciary system also holds two supreme war tribunals, they are tasked to trial and bring a final verdict to war criminals of both Kadolhan and foreign origin, which is done after a certain amount of evidence is gathered and when witnesses are brought in after a war that Kadolha took part in. Throughout Kadolha's military history, since the year the war tribunal was established in 1804, there have been only a few cases involving war criminals of Kadolhan origin, although there was a case of treachery involved, because it was commonly foreign soldiers and officers who were trialed, and very likely imprisoned or executed. The two war tribunals are the following:

The voivodeship of Vačarje, located west of the Kadolhan mainland and separated by a sea is a external voivodeship of Kadolha, hence why censuses are done by special offices, just like with other external voivodeships and overseas territories. Although censuses and estimates are conducted by special offices, unlike overseas territories, they are taken into account with mainland estimates, such as with the population. This voivodeship is bordered by Bloodia to the north. Primoria is an external voivdeship which was officially disputed between the Sajuz and Kadolha during the Cold War, after 1991 it was recognized by the Lipnitian and Satarian government as sovereign territory of Kadolha. Vačarje is divided into three župe: North Vačarje, Central Vačarje and South Vačarje; along with Primoria, which is divided into two župe: West Primoria and East Primoria. According to the 2015 census, the population of Kadolha is 93,890,907 and the overall population density stands at 113 inhabitants per square kilometer. The estimated total fertility rate is 3.02 children born/woman, the birth rate stands at 13, which is significantly higher than the birth rate of 10.5 in 1984. The enforced ban on contraception and abortion helped the total fertility and birth rate to increase, same goes for the 3-year maternity leave that has been reinstated in the past two decades, as well as boosting part-time jobs. The mortality rate is 3.80, while the infant mortality rate is 1.40 per 1,000 live births, which is a decrease from the 2.60 rate in 2000. The intentional homicide rate per year per 1,000 inhabitants is 1.55, it experienced a major decrease since the 1970s, since the intentional homicide rate in 1973 was 5.62. Life expectancy is 82.6 for men and 89.3 for women.

The Government of Kadolha recognizes Kadolhan Rodnovery as the prevailing faith of the country, while guaranteeing religious belief of all its citizens, except for Judaism, which is believed to be rooted out of Kadolha. The government keeps statistics and censuses on the population every year. The 2015 estimate on the population is 96.8% Kadolhan Rodnover (90,886,398), 1,5% Issianism (1,408,363), 1.3% Bloodian Rodnovery (1,220,581) and 0.4% irreligious (375,565).

Kadolhan Rodnover priests
The majority of Kadolhans consider themselves to be faithful followers of the Kadolhan Native Faith, which has been the state religion for centuries.

There is very little presence of irreligious Kadolhans, numbering only 375,565, who are mostly Atheists, Nontheists and to a lesser extent Agnostics.

The Kadolhan language was devised in 1739 by Kadolhan linguist, Karelij Hezajski, where he introduced his edited version of the Cyrillic alphabet in order to adapt it to the reformed Kadolhan language, making it the official script since 1740. From there on, the language spoken before 1740 is referred to as Old Kadolhan. Prior the reformation, Kadolhans used the earlier version of the Cyrillic alphabet.

The only recognized minority language is the Bloodian language, spoken primarily by Bloodians in the west, who's population in specific areas exceed 15%, along with a few Kadolhans who have it as either their mother tongue or secondary language. Common minority languages spoken primarily in border areas only include Lipnitian, because Lubilian and Hakovian are considered to be forms of the Kadolhan language.

Kadolha has a universal healthcare system available for all its citizens, which is funded and directly controlled by regional authorities. The average life expectancy is 82.6 years for men and 89.3 years for women, the obesity rate for men is 5.6%, being among the lowest in Zemlya, which is a major decrease compared to the 6% in the 1980s, while the obesity rate for women has remained 5.2% there has never been a problem with Kadolhans becoming overweight, as the state encourages the people, especially the youth to become physically active sportsmen in order to lead a healthier life. A part of this was the anti-smoking, anti-alcohol consumption and anti-drug campaign funded by the authorities to decrease cigarette consumption, alcohol consumption and drug use, which effectively worked. The government spends 11.7% of its GDP on healthcare, as it offers free healthcare for only citizens of Kadolha and to some extent Bloodian citizens residing in the country.

According to a National Statistics Bureau report, Kadolhans rank among the healthiest people in Slavia, only 10.4% of Kadolhan adults are smokers, 5.6% of the male population and 5.1% of the female population is obese. There have been no concerning health issues that would've caused an epidemic.

Kadolha has a free education system, which is guaranteed for all Kadolhan citizens and to some extent foreigners with Kadolhan citizenship from neighbouring countries such as Lipnitia. Education in Kadolha is regulated by the Bureau of Education, the current Bureau Executive of Education is David Tanasěvić. Education starts in elementary schools, but there is an optional kindergarten for children between the ages of three and six. Compulsory education consists of eight grades of elementary school starting at the age of seven. Students have the option to continue their education for four more years in gymnasiums and vocational schools, or to enroll in vocational training for three years.

The public holidays in Kadolha are defined by the Act on National Holidays in the Republic of Kadolha.

Retrieved from "https://atlas.miraheze.org/w/index.php?title=Kadolha&oldid=11172"
Categories:
Hidden categories:
Cookies help us deliver our services. By using our services, you agree to our use of cookies.