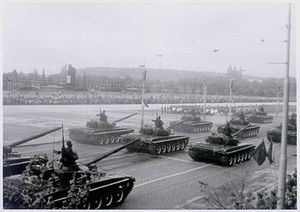 The Granzerian People's Army was distinct within the Vastava Pact as having the largest amount of indigenous military equipment, this was for multiple reasons. Granzery had the second largest industrial base in the Vastava Pact after Second Great War, and much of its industry remained mostly intact after the wars end. In addition, defections from Granzery to the west in the 1950s were very common, thus the Stasnovan government was reluctant to provide Granzery with blueprints for much of its newest equipment.

Retrieved from "https://atlas.miraheze.org/w/index.php?title=Granzerian_People%27s_Army&oldid=10777"
Cookies help us deliver our services. By using our services, you agree to our use of cookies.