Gorbatov,[a] officially the United Proletarian Republics of Gorbatov,[b] is a country in Eastern Vesperia, and is situated along the southeastern shore of the Zentrum Sea. It is bordered by Stasnov to the east, Granzery and Elesar to the south, Vazandia and Antitanca to the west. Its capital and most populous city is Valozhyn.

The word "Gorbatov" derives from the Seldaki words of hǫrr (linen) and bátr (boat), in reference to the term by Seldaki to call early Voronezh traders which traded on heavy longships that ran through rivers, which for the most part traded linen; hǫrrbátr would be the term for these boats.

Through years of Stasnovan influence, resulted in the word hǫrrbátr to develop through the ages as gorbat, -ov is gen pl suffix in Stasnovan (meaning "of the"), thus forming the word of gorbatov (of the linen ships).

There is no exact date on record when the principality was formed; it was likely an evolutionary process. In 145 CE, Voronezh was first mentioned in the Seldaki historical documents as a notable trading town for the Seldaki, in which a confederation of Voronezh traders and a offshoot Seldaki tribe founded the port city of Yedinko, known today as Tormavkovo. In the following eight centuries, Seldaki documents detail that their was no single authority controlling Gorbatov, it was had multiple tribes fighting over control, with none really getting an upper hand. The second time Voronezh was mentioned was a around the time 980 CE, when its ruler was a Stasnovan warlord, known as Oleg the Great, engaged in a military campaign in hopes of uniting the many Gorbatovic tribes. It is detailed that he arrived to Voronezh after he was driven out of Stasnov, as the wave of Christianity swept through Stasnov, with his tribe refusing to accept the foreign faith. Around the year of 982 CE, through the means of force, Oleg the Great united all the Gorbatovic tribes, enabling the city of Voronezh to further develop, with its population in the late 10th century to reaching around 10,000, which allowed significant manpower for an army. By the year of 986 CE, Oleg the Great declared himself the "Grand Prince of Voronezh" and converted to Christianity; Oleg the Great also took the surname of Voronstov, which meant "of Voronezh."

The current law system in use by Gorbatov is based on the socialist model, which is derived from the widely used civil law system, with major modifications and additions from Rykovist ideology of the Proletarians' Party of Gorbatov. In addition, the judicial system of the state is administered upon by the Ministry of Justice and is led by the Minister of Justice. Moreover, according to the Constitution of the United Proletarian Republics of Gorbatov of 1919 and the Law of the Courts of the Proletariat that went into effect on January 1, 1920, the Gorbatovic courts are divided into a three-level court system:

At the top level of administration, Gorbatov is divided into six proletarian republics and the city of Valozhyn, which has a special status being the capital of Gorbatov, an is also the capital of the Valozhyn Proletarian Republic.

At the second level, the regions are divided into voblasts ("regions").

With 1.5 million active troops, and 2.5 million in reserves; the Proletarian Liberation Army (PLA) is considered one of the largest standing military force in the Atlas. The PLA is divided into three official branches which are the Ground Force, the Air Force, and the Navy. There are also four independent arms of service: Strategic Artillery Force, Strategic Support Force, National Defense Force, and the Vympel GSO. The Premier of Gorbatov, in his role as Generalissimus of the PLA, is commander-in-chief of the Proletarian Liberation Army and appoints the armed forces' professional leaders, the General Staff. The military is overseen by the Ministry of Defence, a civilian body headed by the Minister of Defence. Gorbatov's military budget for 2017 totaled $279 billion, approximately 5% of its GDP, constituting one of the largest military budgets in Atlas. It is mandatory for all male and female citizens aged 18–21 to be conscripted for two years of service in the PLA, with a few exceptions. Sniper of the Vympel GSO, armed with a Gorbatovic 12.7mm BKSV-11 anti-material rifle, during a joint-Gorbatovic-Stasnovan military exercise

Gorbatov is a nuclear power and possesses a nuclear triad consisting of submarine-launched ballistic missiles, intercontinental ballistic missiles, and strategic bombers. The PLA also has a substantial tactical nuclear arsenal consisting of smaller explosives, mostly in the form of artillery shells and unguided rockets. Its total number of warheads has been estimated around ≥5,000.

The country has a large and fully indigenous arms industry, producing most of its own military equipment with only a few types of weapons imported. Weapons are manufactured in defence industry plants scattered throughout the country, most of them located in the Voronezh Proletarian Republic.

As a member-state of the Vastava Pact, Gorbatov's defence is intrinsically linked with that of its allies. It consequently extensively cooperates with its allies, most notably with the Stasnovan Armed Forces, on regional defence and international security issues. 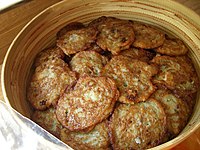 Gorbatovic cuisine consists mainly of vegetables, meat (particularly pork), and bread. Foods are usually either slowly cooked or stewed. Typically, Gorbatovics eat a light breakfast and two hearty meals, with dinner being the largest meal of the day. Wheat and rye breads are consumed in Gorbatov, but rye is more plentiful because conditions are too harsh for growing wheat. To show hospitality, a host traditionally presents an offering of bread and salt when greeting a guest or visitor.

Retrieved from "https://atlas.miraheze.org/w/index.php?title=Gorbatov&oldid=21386"
Categories:
Hidden categories:
Cookies help us deliver our services. By using our services, you agree to our use of cookies.