Donggo Gulmahun (ᡩᠣᠩᡤᠣ ᡤᡠᠯᠮᠠᡥᡠᠨ); 19th of July 1879 – 9th of November 1945) was a Tanggu warlord of the Sahaliyan Clique in the early 20th century. Donggowas known for his eccentric behaviour, his poor governance, his many defections to numerous Tanggu warlords, his skill at horseriding and archery, and his often brutal treatment of enemies. As a result of these and from the actions of his own men, he has been described as "Tangguria's basest warlord" by outsiders, while within Tangguria he is also known as the "Horsemeat General" and the "Three Legged Horse".

Over the course of his life, Donggo was known for a number of eccentric deeds, especially when he led the Sahaliyan Clique from 1928 to 1945. These exploits included: 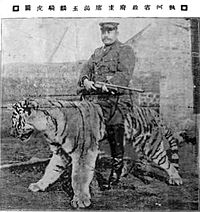 Donggo's second in command Caodan Songgotu riding his pet tiger. Donggo later fed him to this same tiger when he rebelled.

Donggo Gulmahun was also known as the "Five Don't Knows", due to his lack of knowledge of how many men he had in his army, how many horses he had, how many bottles of alcohol he drunk in a week, how many of his soldiers' wives he has slept with, and how many bastard children he had from his encounters with women.

Retrieved from "https://atlas.miraheze.org/w/index.php?title=Donggo_Gulmahun&oldid=20549"
Cookies help us deliver our services. By using our services, you agree to our use of cookies.